Cabaret at Straz Center (Thursday through Sunday)
Direct from Broadway, the acclaimed masterpiece returns to Tampa! As part of their 50th Anniversary Season, the critically acclaimed and award-winning Roundabout Theatre Company is proud to present SAM MENDES (Skyfall, American Beauty) and ROB MARSHALL’S (Into the Woods and Chicago, the films) Tony Award®-winning production of CABARET. Come hear some of the most memorable songs in theatre history, including “Cabaret,” “Willkommen” and “Maybe This Time.” Leave your troubles outside – life is beautiful at CABARET, JOHN KANDER, FRED EBB and JOE MASTEROFF’s Tony-winning musical about following your heart while the world loses its way. Click HERE for tickets and showtimes. Carol Morsani Hall at Straz Center, 1010 North Macinnes Place.

Ringling Brothers and Barnum & Bailey Present Circus Xtreme at Amalie Arena (Thursday through Sunday)
It’s time for your family to be amazed by all the X-TRAORDINARY things you know and love about America’s favorite live family entertainment experience. Be astonished by UN-XPECTED circus spectacles you’ve never seen before and that can’t be seen anywhere else but at The Greatest Show On Earth. Performances through January 29. Click HERE for tickets and showtimes. Amalie Arena, 401 Channelside Drive.

Loni Love at Side Splitters Comedy Club
Loni is in demand and loving it. She returned as co-host for season 2 of her hit daytime talker “The Real” this past year. The nationally syndicated show airs on the FOX affiliates and rebroadcasts in primetime on cable network BET. The show was recently renewed for 2 more years through the 2017/2018 season, and has just been nominated for 4 EMMY Awards. Begins at 8:30pm. $25 per person. Side Splitters Comedy Club, 12938 North Dale Mabry Highway.

Matewan (1987) at Tampa Theatre
Matewan is a fictionalized version of the real events of the Battle of Matewan in West Virginia in 1920. In those days The Stone Mountain Coal Company ran the town: they owned the mine, which was the only source of work in the area, setting hours and wages; they owned the homes all the workers lived in; and they ran the company store, where the workers (paid in scrip) were forced to buy all of their food and supplies at prices the Company set. This show is sponsored by the Florida Future Labor Leaders. Profits will benefit the Tampa Bay Area Chapter. Screening begins at 7:30pm. Tickets are $11 online. Tampa Theatre, 711 North Franklin Street.

Fourth Friday in Downtown Tampa (Various Locations)
Celebrate the best in arts, food and entertainment in Tampa during our fabulous Fourth Friday celebration. This monthly event is sponsored by TECO Energy. Museums and arts venues extend their hours late into the evening and off special discounts. Attendees also enjoy complimentary Pirate Water Taxi rides and downtown restaurant deals. The event runs from 4-10pm. Free wristbands are available at participating venues. Visit their website for a full list of participating venues.

Tim Dorsey Book Signing “Clownfish Blues” and AppleButter Express at Skipper’s Smokehouse
Tim will be doing a book signing at Skipper’s for his book, “Clownfish Blues”. Signing begins at 7pm and is free and open to the public. The Applebutter Express has performed at such prestigious festivals as Bonnaroo Music and Arts Festival, Hulaween, Suwannee Springfest, and many others. Concert begins at 8pm. Tickets are $10 in advance, $13 at the door. Skipper’s Smokehouse, 910 Skipper Road.

Gasparilla Pirate Fest and Parade
Pirates, Parades and “Piratechnics” Ye Mystic Krewe of Gasparilla invites you to join them for the pleasures ‘n treasures of Tampa’s historic Gasparilla celebration. A Gasparilla Invasion Brunch takes place at the Tampa Convention Center from 9:30am-1pm. Click HERE for tickets. The Jose Gasparilla sets sail at the south end of Hillsborough Bay at 11:30am, sails north to Seddon Channel and docks at the Tampa Convention Center at 1pm. Bleacher tickets are also available on their website. The parade of the pirates begins at 2pm and lasts until 5:30pm. The parade begins at Bay to Bay Boulevard and Bayshore Boulevard. It continues along Bayshore to Borein Street, then North on Ashley Drive. Parade ends at Cass Street and Ashley Drive. Visit their website for full details on the festivities.

Trae Pierce and the T-Stone Band and Shevonne at Skipper’s Smokehouse
Trae Pierce can funk you up. A veteran of the stage, Trae has been touring with bands such as Sugarfoot’s Ohio Players, the Blind Boys of Alabama, Dr Hook, James Brown and more for over three decades. In addition to his time on the road, Trae has produced and recorded with hip-hop, rock and blues icons such as Flo-Rida, Phil Collins, Peter Gabriel, and Emmylou Harris. 8pm. $10 in advance, $13 at the door. Skipper’s Smokehouse, 910 Skipper Road.

JB Ball at Side Splitters Comedy Club
Raised by a southern conspiracy theorist and a performer from LA, J.B. Ball is built for fishing out the ridiculous and putting it on display. As a charmer who refuses to let things go, he’s deceivingly edgy and intelligent in a way that forces audiences to think and re-evaluate what’s going on with us as individuals, a country, and a race of people. Begins at 5:30pm. $10. Side Splitters Comedy Club, 12938 North Dale Mabry Highway.

Dead Kennedys at The Cuban Club
One of the top influential punk bands of all time, the Dead Kenndys, peform at the Cuban Club on Saturday night. Doors open at 7pm. Tickets are $20+ fees. The Cuban Club, 2010 Republica de Cuba (14th Avenue).

Joshua Bell at Straz Center
After tremendous critical acclaim and a successful concert career, lauded violin prodigy Joshua Bell became a household name in 2007 when his video of playing in a D.C. metro station as part of a Washington Post article on art and context went viral. Since then, Bell’s sublime, thoughtful career as a musician opened the world of classical music to a new generation and galvanized his role as not only a master musician but also as the vanguard of the form. Sam Haywood, piano, will accompany Joshua Bell. Begins at 7pm. Tickets start at $65. Click HERE to reserve your seats. Ferguson Hall at Straz Center, 1010 North Macinnes Place.

Talking Dreads at Skipper’s Smokehouse
Talking Dreads began as a project born from the audacious notion that hardcore Heads-lovers wouldn’t mind a tinkering or two with their favorite Talking Heads tunes, and there is a lot of great music here that will make you stop, listen and smile a little bit more as you’re grooving along to the joyous rhythms and jubilant spirit of the island vibe. 5pm. $7 in advance, $10 at the door. Skipper’s Smokehouse, 910 Skipper Road. 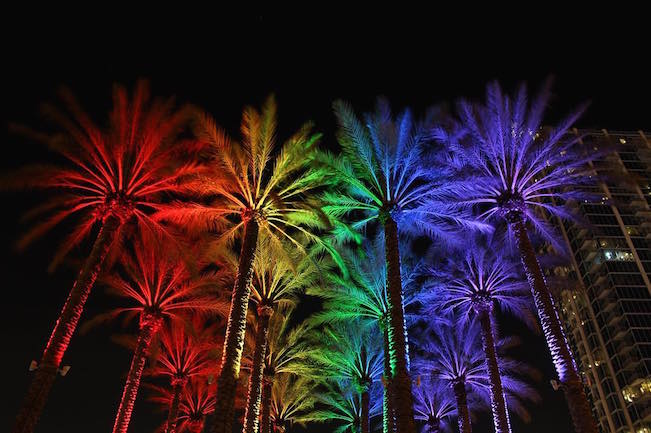