98ROCKFEST at Amalie Arena
Disturbed, Shinedown, Chevelle and others will perform live at 98 Rock Fest Friday night. 98ROCKFEST will kick-off with a free pre-show on Ford Thunder Alley (West Plaza) at Amalie Arena. The pre-show event will be headlined by Pop Evil and include performances by Skratch and Sniff and more. Doors open at 6pm. Click HERE for tickets. Amalie Arena, 401 Channelside Drive.

Beautiful: The Carole King Musical at Straz Center (All Weekend)
Beautiful – The Carole King Musical tells the inspiring true story of King’s remarkable rise to stardom, from being part of a hit songwriting team with her husband Gerry Goffin, to her relationship with fellow writers and best friends Cynthia Weil and Barry Mann, to becoming one of the most successful solo acts in popular music history. Along the way, she made more than beautiful music, she wrote the soundtrack to a generation. The production will run through May 1. Click HERE for tickets and showtimes. Carol Morsani Hall at Straz Center, 1010 North W.C. MacInnes Place.

The Ultimate Joe Cocker & Santana Experience: Mad Dogs and Sacred Fire at Skipper's Smokehouse
The members of Mad Dogs – The Joe Cocker Experience have performed with dozens of regional, national and international acts, covering every genre of music. This is what gives Mad Dogs the rhythms and grooves they project. Mad Dogs doesn’t simply play a bunch of Joe Cocker songs. They recreate Joe Cocker Live In Concert. It’s all there, the bluesy and soulful voice of Joe Cocker, the lush female backup vocals, saxophone, 2 keyboardists, percussion, guitar, bass and drums.

REWIND: The Room at Tampa Theatre
See the controversial cult favorite "The Room" Friday night at Tampa Theatre. Known as one of the worst films ever made, this strange film was written and direct by Tommy Wiseau. He also starred in the film. Synopsis: Johnny is a successful banker who lives happily in a San Francisco townhouse with his fiancée, Lisa. One day, inexplicably, she gets bored of him and decides to seduce Johnny's best friend, Mark. From there, nothing will be the same again. Film begins at 10pm. Click HERE for tickets. You can also purchase tickets at the box office. Tampa Theatre, 711 North Franklin Street.

Tampa Riverfest (Saturday and Sunday)
RiverFest 2016 will be held along the Tampa Riverwalk in Tampa Heights and Downtown Tampa. This free, annual event presented by Friends of the Riverwalk in conjunction with the City of Tampa, will attract people to the Riverwalk and highlight Tampa’s cultural institutions, local music and restaurants. The event serves as a fundraising program for Friends of the Riverwalk (501c3 non-profit). RiverFest 2015 will feature unique, family-friendly programing in all the parks and public spaces on the Tampa Riverwalk, as well as special programming at the many cultural and waterfront dining establishments along the way. Festivties run from Saturday to Sunday. Click HERE for a full schedule of events. Begins at 8am on Saturday.
WMNF Tropical Heatwave
Ra Ra Riot, Nikki Hill, CelloJoe, Geri X, The Bright Light Social Hour and more bands take over Ybor City on April 30 for one of the best music fesitvals of the year. Click HERE to get your passes to the event! Click HERE to learn more about the festival and to see the full music schedule.

Mayor's Mac and Cheese Throwdown
This FREE, signature event presented by Friends of the Riverwalk in conjunction with the City of Tampa and Mayor Bob Buckhorn, celebrates the Riverwalk and highlight numerous local Tampa restaurants. The event serves as a major destination for Tampa RiverFest 2016 and is a fundraising program for Friends of the Riverwalk (501c3 non-profit). In addition to Mac & Cheese tastings, the Mayor’s Mac & Cheese Throwdown will feature a stage with live entertainment of local and regional musical talent, craft beer and wine vendors and games / activities for all ages. 4-7:30pm. Curtis Hixon Park, 600 North Ashley Drive.

Patel Conservatory Presents: On The Edge at Ferguson Hall
Featuring the award-winning dancers of the Patel Conservatory Popular Dance Program alongside artists from Next Generation Ballet, On the Edge offers something from the contemporary dance world for everyone. Directed by former Radio City Rockette Dance Captain Kelly King, On The Edge showcases a variety of works fusing high-energy precision with the fluidity of contemporary dance, the percussion of tap and more. 7pm. Click HERE for tickets. Ferguson Hall at Straz Center, 1010 North W.C. MacInnes Place.

We Built This City at Straz Center
A giant public construction site on the Straz Center’ Riverwalk, We Built This City will utilize thousands of cardboard boxes and the energy of kids and families to build a magnificent imagined city. Buildings go up, are pulled down, redesigned, extended, walked through and reconstructed, simultaneously placing each child in the role of performer, creator, audience and architect. Underscored by a rocking soundtrack from an on-site DJ, the participants are guided by performers from Polyglot Theatre who play construction workers, facilitating free play, performing as hilarious characters and setting tasks which bring people together. FREE. Takes place in a tented area outside Carol Morsani Hall at Straz Center, 1010 North W.C. MacInnes Place.

Purple Rain: A Free Community Screening at Tampa Theatre
Purple Rain stars the inimitable Prince as the Kid, a rock star still in the early days of his rise as frontman of a hot new band. Music, as it is for so many, is an escape from his tumultuous reality — his father is an abusive alcoholic, his mother is distant and unfeeling, his home is a wreck. He meets Apollonia, an aspiring singer (and real-life protégé of his), and starts up a romance. But their magnetic attraction to each other isn't enough to overcome the Kid's echoes of his father's destructive behavior, and a merciless musical rival (Morris Day, also playing himself) steps into the turmoil to steal away everything the Kid cares about. The Tampa Theatre presents this special screening Friday night at 9pm. FREE and open to the public. Tampa Theatre, 711 North Franklin Street.

Tampa Bay Bloody Mary Festival at Channelside Bay Plaza
Join the Tampa community as we celebrate the most beloved brunch cocktail in the world: The Bloody Mary. Enjoy unlimited samples of the best bloody mary concoctions from Tampa's best restaurants and vote for the best one to win the Golden Celery Award! Mimosa's and brunch food are also available for purchase! 11am-3pm. Click HERE for tickets: GA $35 in advance, $45 at the door; VIP $80 in advance, $95 at the door. Channelside Bay Plaza, 615 Channelside Drive. 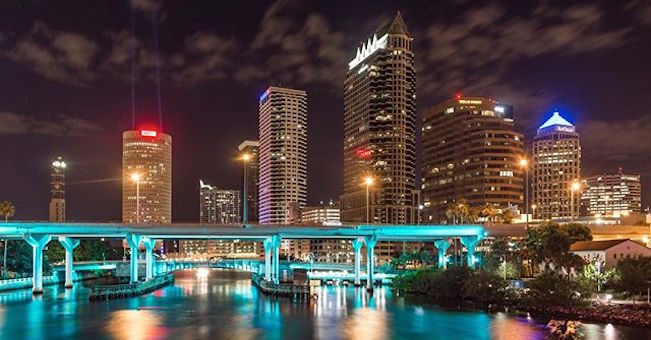