January Tour: Take Me to the Movies
Hosted by History Bike Tampa, this bike tour explores Tampa’s major landmarks that have appeared in movies. Registration starts at 9:30am in front of Kahwa Coffee (bottom of the Element Building) located in downtown Tampa. We will depart *promptly* at 10am. The tour is provided free of charge, however there’s a suggested donation of $5. The ride will last approximately 2 hours and will be traveling in light to moderate riding conditions. Bathroom break not guaranteed. 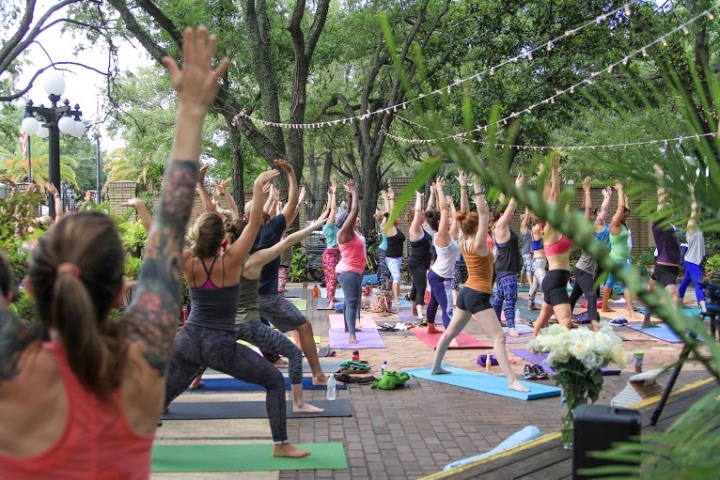 Marvel fans, assemble for this live, action-packed, legendary battle to defend the universe from evil. Spider-Man, the Avengers and the Guardians of the Galaxy join forces with Doctor Strange, master of the mystic arts, in a race against time to recover the Wand of Watoomb before it falls into Loki’s hands. This ancient artifact holds immeasurable mystical power and would allow Loki to achieve his eternal quest to crown himself ruler of Asgard and Earth. This all new show unites some of Marvel’s greatest Super Heroes including Iron Man, Captain America, Thor, Black Panther, Hulk and Black Widow against some of the most threatening villains. Their journey sparks new feuds with old foes, pitting student against mentor, sister against sister and brother against brother. Witness cutting-edge special effects, aerial stunts and video projection in this incredible adventure. Fans of all ages will be immersed in the Marvel Universe and experience it all with their family…LIVE! 7- 9 pm @ Amalie Arena 401 Channelside Dr.

Discover vintage, upcycled, industrial, shabby chic, Old Florida, Americana, pop culture of yesteryear and just an all-around love of all things old at two convenient locations from 9 am – 6 pm.  The Plant City market is located off of Exit 22 in Plant City with 13,000 square feet of vintage goodness.The Ybor Market, a facility with 10,600 of air-conditioned space inside and sales outside when the weather cools down, can be found in Tampa’s beloved historic district, just five blocks from Seventh Ave.

Do The Local Motion Walking Tour 11:30 am – 1:30 pm with historian Marilyn Zoidis who will talk about the Riverwalk Monuments. Zoidis has more than 25 years in leadership positions at some of America’s most prestigious museums. Her work in public history explores social and cultural history themes important for a deeper understanding of our nation’s past. Her projects, including preservation of the Star-Spangled Banner, have brought national attention. She has appeared on the Today Show, CBS Sunday Morning, CNN and CSpan. Intersection of N. Franklin St. and Jackson St.

Catch Friends of Fil Jazz Trio at this groovy little bar from 8 – 10 pm. They’ve recently released original music on CD and online everywhere! “Soul Stew” was expertly recorded at the historical Springs Theater in Tampa, FL and really captures the group’s thoughts on life and music through instrumental tunes written over the past 15 years or so ranging from modern to vintage jazz fusion. 5016 N Florida Ave.

This is your last chance to catch this mesmerizing exhibit by nine artists before it closes Jan. 5. 1631 N. Franklin Street

Gateways to the Caribbean: Mapping the Florida-Cuba Connection

For some, the connections between Florida and Cuba begin with Fidel Castro’s takeover in 1959. For others, especially in Tampa, they begin 70 years earlier with the arrival of the cigar industry and the founding of Ybor City in 1886. Or, maybe it was back in the 1850s when the McKay family started shipping cattle from Tampa’s Ballast Point to Havana. In this exhibit through Jan. 28th, you’ll discover the unbroken thread between the Sunshine State and the island nation dating back nearly 500 years.through rare and original maps, lithographs and other documents. Tampa Bay History Center, 801 Old Water St.

Get All Shook Up: Celebrate Elvis’s Birthday Weekend

Head over to Seminole Hard Rock Tampa to experience Elvis Live! Featuring Ted Torres- Internationally Known World Champion Elvis Performer! This  multi-talented actor/singer/songwriter/musician who has accomplished extensive touring around the world. He is the 2016 “Images of the King” World Champion and he’s performing at the Hard Rock Cafe – Tampa from 9 – 11 pm. 5223 Orient Rd.

Bruce Bruce is a name synonymous with keeping audiences rolling with laughter thanks to his captivating improv skills and larger than life comedic style. Bruce’s steady style of comedy has been showcased across the country, and he has been entertaining audiences young and old, and of all backgrounds, for years. His wit, spontaneity and dazzling personality set him apart from other standup comedians. Although Bruce is known for his adult comedy, he prides himself on not using vulgarity to win a laugh, and is no stranger is winning over new audiences with every appearance he make. You know him best for his role as host for two seasons of BET’s “Comic View.” 600 E 8th Ave. C-112, Ybor City.

Shop Till You Drop

Catch the best deals in town post-holiday at the International Plaza and Bay Street, then sip a martini and watch the playoffs at The Capital Grille.  Click here for shops and restaurants.

Nanette Wiser is a journalist with a passion for local eats, beats & beaches.