The biggest Tampa stories of 2022

This has been a big year for new restaurants, businesses, and neighborhood developments in the city of Tampa, and the greater Tampa area. We have had so many major stories over the past 12 months, but there were some that truly stood out amongst the rest. From a future surf park, to a giant shipping container shopping center and the arrival of Shaq’s big chicken, here are are our most read stories of 2022.

This was also a major year for Tampa. Forbes named it the best place to live in Florida. It was listed as one of the top foodie cities in America. The Tampa International Airport won the best bathroom in North America contest. This was also the year The MICHELIN Guide came to Florida. In case you missed it, 2022 was the year Tampa got its first 5-star hotel. Welcome to The EDITION.

A Crystal lagoon with floating cabanas debuts in Tampa Bay

At 12 million gallons, the lagoon holds water equivalent to almost 900 regular swimming pools. The lagoon depth ranges from shallow water up to about 14 feet deep so there are areas for people of all ages and stages to enjoy. Click for the full story.

Three of the most beautiful restaurants in America are in Florida

The three restaurants that earned praise are Louie’s Backyard in Key West, Cap’s on the Water in St. Augustine, and Bayfront Bistro in Fort Myers. The selected restaurants earned their spot due to aesthetics and view, so it’s no surprise to see a spot out in Key West garner some adoration. Click for the full story.

A name for the TPA flamingo

Few things have captivated residents and visitors alike quite like the giant TPA flamingo sculpture. Officials announced a naming contest for the giant piece of public art and received well over 65,000 submissions.

The 21-foot flamingo, located in the Main Terminal, has become a meeting point and photo destination for travelers, tourists and locals alike. This colorful, floor-to-ceiling sculpture created by artist Matthew Mazzotta is hard to miss.

After the contest closes, the Airport will select the top three names. The public will then have a chance to pick their favorite at online, and the winning name will be revealed at a later date on TPA’s Twitter, Facebook and Instagram accounts. Click for the full story.

Two Tampa BBQ gems were featured in the national spotlight on May 13 as part of Good Morning America’s United States of BBQ. The contest pit pit masters across the country against one another. Tampa’s Station House BBQ and Jazzy’s BBQ went one-on-one to see who brings the most smoke to the city. In the end, locally owned and operated Jazzy’s took home the crown. They were then featured in the finals of United States of BBQ on May 16. They competed against winners from Dallas, Chicago, and D.C.

Tampa is for donut lovers. There are so many exceptional sweet sunrise shops to choose from that it’s hard to comfortably pick just one in the morning. Tampa’s own Hole In One Donuts was in the top 50 best donut shops in America. Yelp aggregated reviews from across the country, broke down baking trends and key words used in donut reviews, and made a list based off of the thousands upon thousands of recommendations for shops across the nation. Click for the full story.

Shaq is an NBA Hall-of-Famer, celebrated commentator on TNT, a touring DJ, and just one of the best pop culture icons of all time. The super athlete is also a savvy businessman, and he’s bringing his Big Chicken empire to the Sunshine State in the coming years. Fox 35reported that Shaq signed a deal with Panhandle Restaurant Group back in April 2022 to bring the concept to North Florida. Creative Loafing and Sun Sentinel now report that Shaq has signed a deal with DMD Ventures which will bring Big Chicken to Orlando, West Palm Beach, Fort Lauderdale and Miami in addition to the Tampa Bay region.

KRATE is a shipping container shopping and dining center

The innovative KRATE Micro Shops is built from 90 repurposed and locally manufactured shipping containers. The venue includes a large stage for presentations and live music performances, as well as The KRɅTEground, an interactive play area for children.

I highly recommend you come hungry to KRATE because some of the very best dining experiences in the city are happening at this sprawling entertainment center. ChamosVenezuelan food truck has posted up inside a container and are serving up their famous (and savory) cachapas to visitors. Palani is bringing a taste of Hawaii to Wesley Chapel with the original Saimin bowl. Today’s traditional bowl the Saimin noodles are topped with Cantonese style slices of sweet barbeque roasted pork char siu, mild savory Japanese style Kamaboko, followed by sweet, fresh chopped green onions. Click for the full story. 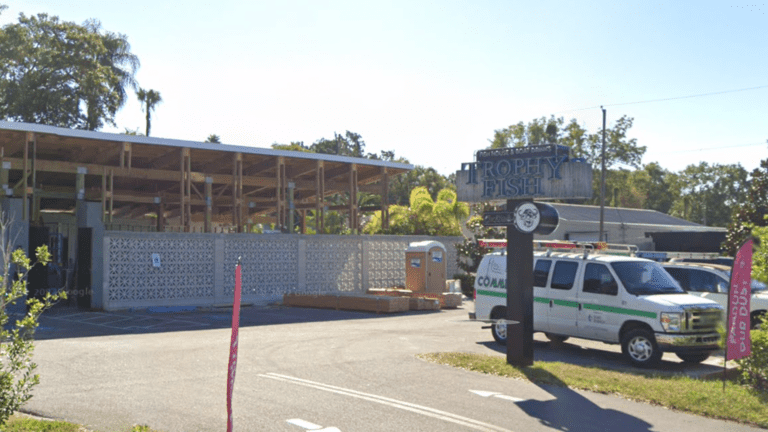