Mr. Dunderbak’s has served Tampa the best German cuisine in the region for nearly 50 years. The Biergarten and Brewery is located at 14929 Bruce B Downs Blvd.

Ask anyone in Tampa for a great brewery and I’d bet vivacious German gem, Mr. Dunderbak’s, is high on their list. With over 400 varieties of craft and European beers available for purchase, this multi-generational dive destination is widely regarded as one of Florida’s top Biergartens. In the 1970s, however, things were different.

“Back in the 70s, this place was owned by a little German couple,” recalled James Ellis, current Dunderbak’s co-owner. “It was a franchise at the time. There were 30 of us across the country.”

Sitting across from him in one of the restaurant’s cozy side rooms, I glanced into the charming Hofbrau Haus reminiscent main space. Long, communal tables stretched across the stone floors, while foreign flags draped proudly from the ceiling. On the left wall, shelves of imported spices and cookies towered above the heads of the lively guests.

It must had been a while since Mr Dunderbak’s had been a chain—I concluded—because the unique atmosphere of the restaurant was certainly not something I’d seen before.

“In the 90s, my business partner, Christina Ellis, and I purchased this location,” James continued.  “Over time, the franchise folded, and we were able to turn Dunderbak’s into the brewery that it is today. We’ve got 12-13 in-house brewed beers on tap, and we’re the center for Tampa Bay Beers Home Brewing club. The beer giants of the industry have all stopped into this place, and we’ve got tons of awards.”

Eyes filled with a subtle hint of pride, James looked through the glass doors towards his extensive draft list. “We’ve really become an eclectic beer bar.”

As passionate as James is about beer, however, only a third of Mr. Dunderbak’s business comes from the drinks. The remaining 60% revolves around a hearty, extensive menu of delicious German food. Featuring massive portions of perfectly pounded schnitzel, crispy potato pancakes, and cheese covered pomme-frites (to name a few), it is the ability to combine mouthwatering international dishes with James’ craft beers that truly makes the restaurant a local institution. 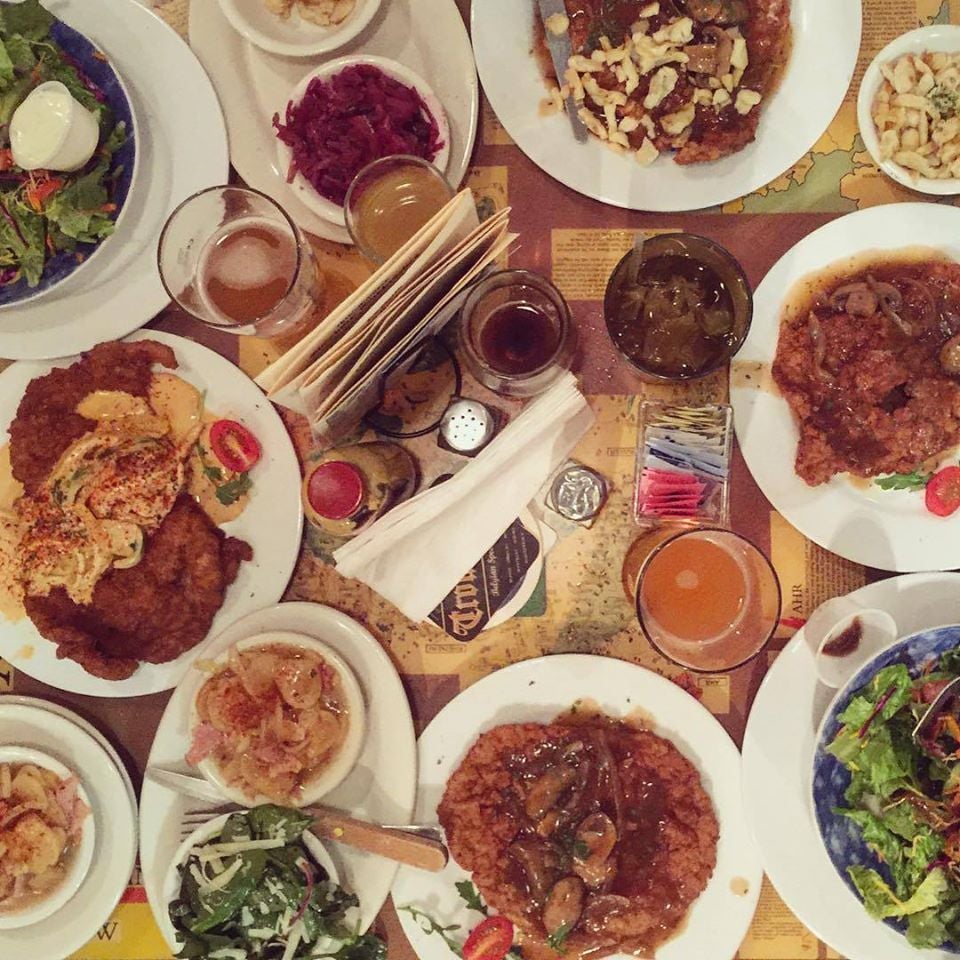 “At first, I never thought about the food,” James admitted. “I just wanted a biergarten with a few menu items on the side. But then the people kept coming back for the food, and so that list got bigger.”

Curious what some of those enticing dishes were, I asked him to elaborate on the history and highlights of Dunderbak’s locally famous fare.

“My family is from Germany,” James responded, motioning towards a collection of 19th-century photos of his relatives hanging near the restaurant’s entrance. “A lot of the dishes we make here are inspired by their recipes. The coleslaw is my mother’s, and the potato pancakes are my Oma’s. The menu is pretty much German classics with a creative, American family twist. You’ll also see a lot of Dutch Pennsylvanian influence.”

The “mom’s-touch” and “grandma’s-love” feel of the dishes immediately helped explain why Mr. Dunderbak’s, which was once expected to be a nightly drink spot, had grown into a such monumental Tampa landmark. With a menu of comforting dishes that taste like home, families of all ages have spent decades being drawn into the inviting space. As a result, Mr. Dunderbak’s has become a multi-generational restaurant favorite, and the creation of familial memories around a warm, hearty meal has kept locals coming back year after year.

After chatting with James, I was ravenously hungry—but who could blame me? With all that talk about pan-fried sausages, rich gravies, and melty sandwiches, I’d have to be super human to ignore my growling stomach. Luckily, the Dunderbak’s team presented me with one of my favorite German lunch classics; a buttery, melty Reuben.

As I tore into the indulgently sloppy (and absolutely divine) sandwich, I was approached by co-owner, Christina, who had taken notice of the creamy river of thousand island dressing dripping down my wrist. After she handed me a much needed napkin, I was able to get in a few words with the busy entrepreneur. 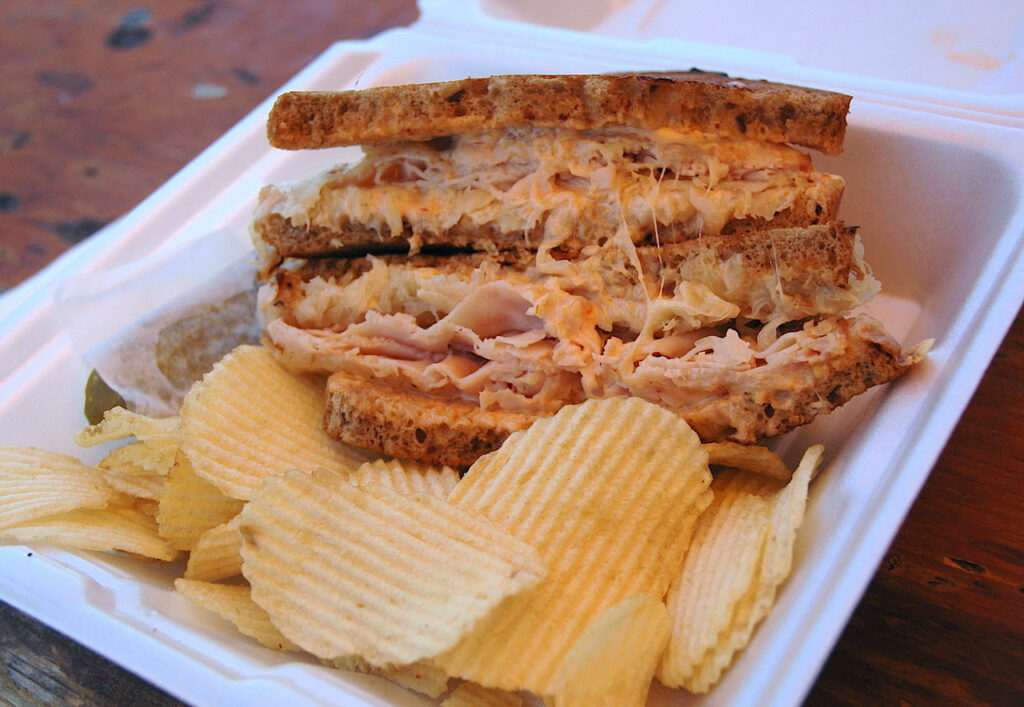 While I ate, Christina told me stories of elderly locals celebrating their 90th birthdays in Dunderbak’s warmly-lit halls, and the hordes of college students who have come in to attempt to devour a three cheese, fried meat, and onion ring sandwich famously known as the “Von Bomb.” Babies have spent their first restaurant meals in the space, she recalled, and couples have even gotten engaged at the nostalgic, wooden tables.

“This really is a family friendly place,” Christina shared, smiling as a young waitress passed by. “People grow up coming here, and then bring their first kids here.”

As the daily orders began to pick up speed, a few more servers weaved throughout the space.

Off them, Christina continued; “Even the staff here feels like family. And they never want to leave! When the college kids graduate, I always have to push them to go out and find their ‘real’ jobs.”

She shook her head with a short laugh, which eventually faded into a lengthy exhale.

“I never imagined having a restaurant,” she stated, “But here we are twenty years later. It’s a lot of work, but the people and the memories make it worth it.” 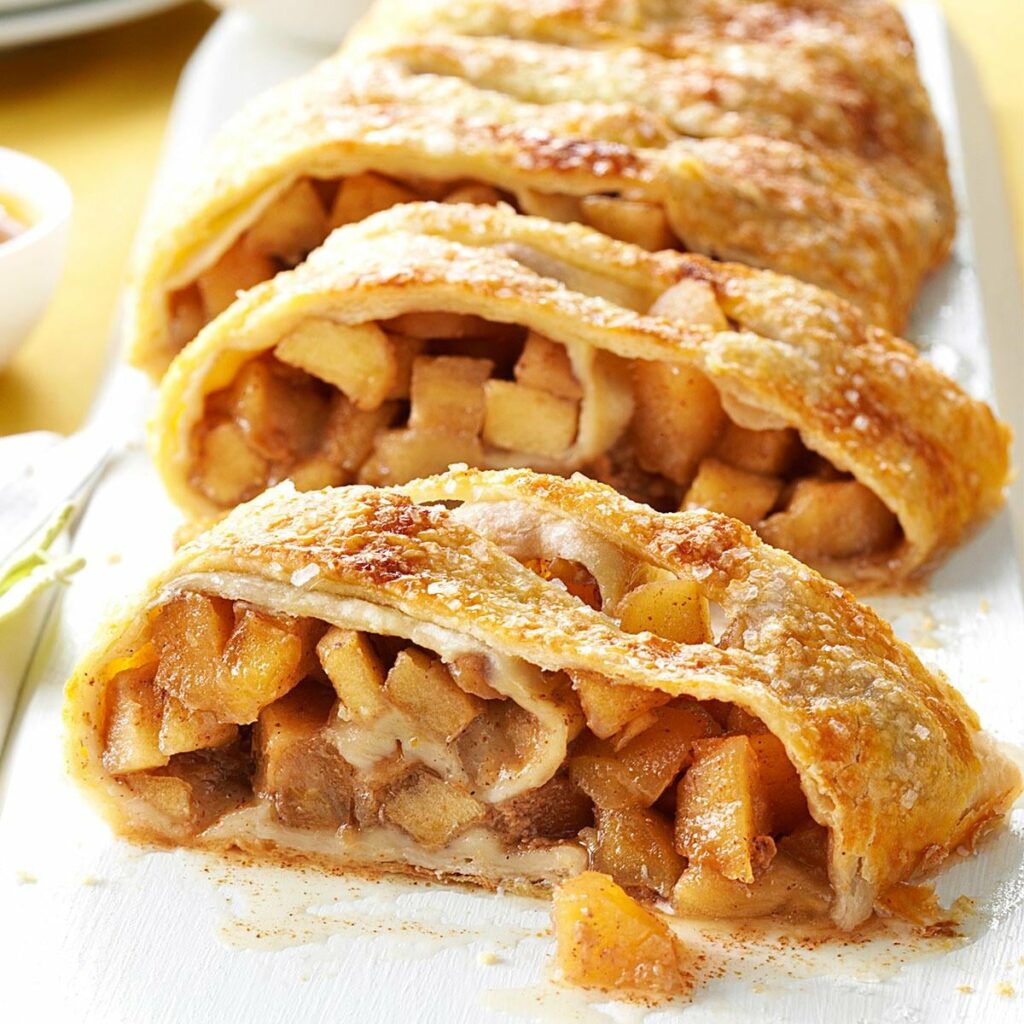 Hungry for a visit?

Craving a hearty, homecooked meal? Or an evening of craft drinks, vibrant energy, and laughs? From camaraderie to culinary delights, Dunderbak’s has got you covered.

(Oh—and if anyone is interested in starting a “Von Bomb” sandwich eating tournament, hit me up. An onion ring sandwich eating competition is definitely something I need in my life ASAP.)

Mr. Dunderbak’s Biergarten and Brewery is located at 14929 Bruce B Downs Blvd. To explore a full food and drink menu (or to place a to-go/delivery order), diners can visit https://dunderbaksbeer.wordpress.com/, or follow the restaurant on Facebook; https://www.facebook.com/dunderbrau/.

Kojak’s, a Tampa BBQ institution, will be demolished this summer